The second workshop of the ELIXIR-funded Staff Exchange Project entitled “Empowering ELIXIR Nodes to measure and communicate their performance and impact” took place on March the 12th and was held in a conference call due to the current pandemics. The conference was organized by the representatives of the involved ELIXIR Nodes (ELIXIR-IT, ELIXIR-NO, ELIXIR-PT and ELIXIR Hub) and had the pleasure to count with Jelena Angelis, member of the EFIS centre & RI-PATHS project. The goal of this follow-on workshop was to develop and refine the understanding and approaches that have resulted from the previous workshop.

After a brief presentation introducing the framework for the assessment of the socio-economic impacts of research infrastructures given by Jelena Angelis, participants took part in an active discussion about the new Validated IA Model from the RI-PATHS project. This exercise was followed by a round-table where each national Node representative presented their current approach for performance and impact with the objective of collectively assessing its progress and identifying the corresponding challenges. Ana Portugal Melo, in representation of ELIXIR-PT, reported the preliminary results of the impact assessment conducted for  “Ready for Biodata Management?” and “CorkOakDB”, two activities pursued by the Portuguese node of the ELIXIR, using a participatory exercise supported by a Canvas developed by the node.

A follow-up workshop is in the planning to “test and showcase” the approach in May 2020, probably via conference call due to the persistent pandemics situation. For further information on this project, please contact its coordinator: Ana Portugal Melo, Deputy Head of Node for ELIXIR Portugal, ammelo@igc.gulbenkian.pt. 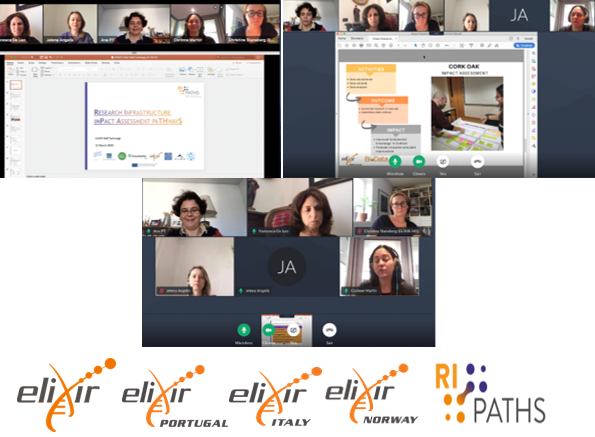